Here street art has been incorporated into the amusement park. Each year since 2015 , Coney Art Walls has added to their collection of murals and now has more than 60.  Go when the park is open!

below: More of the Art Walls.  The largest one in the photo is by Nina Chanel Abney.  The one closest to the camera is ‘Handsome Brother and the Mermaid’ by Aiko which is based on an old Japanese tale called “Taro Urashima and Dragon Palace”.

below: Behind a chainlink fence, another Coney Island mural.

below: And yet another Coney Island mural, this one with old black and white photographs of New York City views inside the letters.  The Statue of Liberty makes a great exclamation mark.

below: Although it is disappearing behind the ivy, this is yet another Coney Island mural.

below: Clown face and more faces.  Live and let live – street artists against hate in the bottom right.   And that blue guy?  Have you seen how many teeth he has?!

below: Smell the flowers before they die and by the looks of it you don’t have long….

below: A jumble of strings and wires and a few found objects all wound up and made into a slightly human-like shape.  Man is a mess?

below: The 5th, and last one here, Coney Island mural is the newest and the biggest. This is “Coney Is For Everyone” on Stilwell Avenue, painted by Danielle Mastrion.  It was an Alliance for Coney Island project.

below: A blue Subway Doodle monster sleeps in front of Nathans on the boardwalk.

below: Another result of the Alliance for Coney Island efforts is this multicolour mural on the shutters that was painted by Ledania.

below: Lock him up! Donald Trump behind bars. Doesn’t he look cute in black and white stripes?

Her hair is always a tidy profusion of black and white flowers and there is often a tiny little red heart tucked into her curls.

These characters are the creation of drecks.

Small collages of images or photographs along with printed messages on Priority Mail stickers from the US Postal Service are the work of Sticker Maul and they can be seen around Manhattan. Most of the ones shown here were found on the Lower East Side near The Bowery or Freeman Alley.

below: Their message is usually positive and uplifting such as this ‘Stay Hopeful’.  Is the word Go from a previous sticker that has been covered?

below: Flowers are pretty and so are you.  They look so much like packages of seeds; let’s spread some seeds of hope and acceptance.

below: Playful and fun. We all need a smile in our lives and yes, we need friends too.

below: An exception here – instead of a sticker, a small miniature plastic pail finds a home in a small niche in a wall.

Stay on the lookout for other great stickers!

There are two large colourful murals on 10th Avenue that were painted by Eduardo Kobra. Both are visible from the High Line, Manhattan’s elevated park.

below: Mother Teresa and Gandhi as seen from the High Line

and then closer up, face to face, respectful, hopeful

below: A hint of a second mural – Andy Warhol can be spotted between two buildings.

below: Above the Empire Diner in West Chelsea is this mural inspired by the carvings on Mount Rushmore, a re-imagining of it if you will. Instead of four American presidents there are four famous artists – Andy Warhol, Frida Kahlo, Keith Haring, and Jean-Michel Basquiat.

In a vacant lot on 14th Street in Manhattan are two large murals by the street art team, OSGEMEOS (or Os Gemeos), a Portuguese word meaning twins. An apt word in this case because the two Brazilian artists, Gustavo Pandolfo and Otavio Pandolfo, are twin brothers. The murals were painted in 2017 after a building was demolished – the lot is still vacant and the murals are still looking good (even if they are behind a fence).

They face each other across the wasteland. Music fans might be able to find the references to various musicians that have been included in the paintings.

Phoebe paste-ups have been seen around New York City for a few years now. Sometimes she’s whimsical and sometimes she’s serious – she’s had a very busy life! She even has her own instagram page, Phoebe New York, where you can find all the other Phoebes! 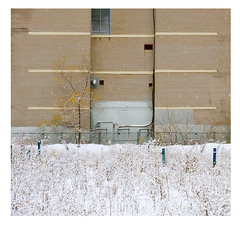 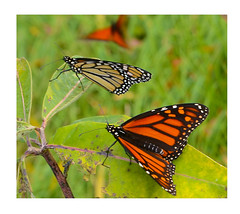 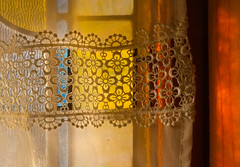