There are numerous paintings by Bulgarian street artist Dimitar Mekhandziiski (aka Stern) in Plovdiv Bulgaria.   Here are some of the ones that I saw in April 2017.

below: A dragon hand puppet on the end of a blue arm and another man in a red hoodie, looking down on the stage as a man walks past.

below: The making of a wooden puppet?

below: The crocodile (alligator?) has a blue glass heart between its jaws.  Be careful!  Is that a grenade inside the crystal?

below: Empty chairs and a table in front of a mural… a pink creature beside another ugly creature with green skin, beady eyes, and a very long tongue.   Inside the window next door is the face of a strangely beautiful character with long hair, pink eyes, and blue skin.  In its hand (with watch on its wrist) is a flaming torch.

below: Riding the dragon (crocodile?) and wearing a mask.

below: In contrast to his other work, this frog and these mushrooms look much more realistic.

A large mural of a young woman wearing traditional Bulgarian clothes has been painted by street artist massimo on the side of a building in Sofia.  She is holding a loaf of bread – bread plays an important role in Bulgarian traditions, customs and holidays.

She has a flower in her hair, a rose, which is the national flower of Bulgaria.   But not all of the symbols that she is adorned with are Bulgarian.  On her forehead and around her neck are “third eye” symbols, or chakras.

She stands tall, smiling over the sidewalk, perhaps she’s wiggling her toes. 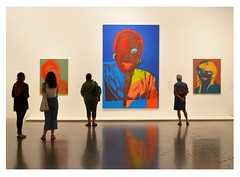 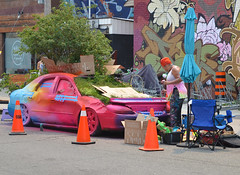 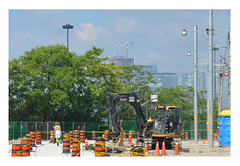