I have recently uploaded a video to youtube that I made with all the pictures that I took of street art in Casablanca.  You can find the link to the street art here.

There is a path that runs along the shore of the Atlantic Ocean, leading to the new Hassan 2 mosque.  Beside the path is a wall that has been painted with street art.  When I walked here in October 2019, these are the murals that I saw.   I have only been able to identify some of the artists.

below: Like all the murals on this wall, this one is looking out to sea

below: A man in a purple camo hat, by Majid aka Majid El Bahar

below: Casablanca plus text (artist’s tag) by TRUST

below: Would you kiss a shark?  Even one that claims to love his mom?

below: Close up of a man’s eyes and nose, signed as Senzoclouds aka Senzo or Mr. Clouds.

A low wall in the older part of the city… if I remember correctly it might be on one side of a taxi parking lot?   As I was taking pictures, an older man stopped to talk to me about the paintings on the wall.  I think that he said that a group of students painted it.

The mural is full of Casablanca scenes such as this image of the Hussan 2 mosque.

below: Curly metal railings and grilles like this can be seen all over Morocco.

below: The Moroccan flag is a green star on a red background.

L’Boulevard – A long wall was painted with several murals by different artists as part of the first Sbagha Bagha festival in 2013.  Many of the colours have faded and some parts of the wall’s surface has disintegrated, but enough of the pictures remain that with some imagination you can visualize what was once there.

The wall is in the older part of Casablanca, near Avenue des FAR and Place de la Concorde.

The animal (dog?) in the leather helmet and aviator glasses is the work of Aouina as are the coloured squiggles at the bottom.

A young man on his motorbike, by FLAN and Cisco KSL, both from Barcelona (the latter seems to be more involved with tattoos & clothing recently). The rider seems to have lost his cigarette and a screw or two.  I am not sure who did which part of the mural.

A taxi full of people, and many people beside, by Rebel Spirit aka Mohammed Elbellaoui

The old man and the teapot were also painted by Rebel Spirit.  Originally, there was writing in Arabic beside the man.  The top part of the wall has broken off, taking the artwork from the murals with it.

This older woman with the head scarf, heavy load, and walking stick was painted by Mouhim Simo.  The red paintings (above) are a later “addition”.

This stencil work has been added since the murals were painted.  It looks very Moroccan with the blue tile work.  The two men neatly fit into a heart.

Beside it is another stencil by the same artist.  This time it is four winged fish radiating from the center.   Unfortunately, I haven’t been able to figure out the artist’s signature.

There is an incredible amount of good street art scattered around  Casablanca, especially large murals on the ends of apartment buildings.

On Blvd Anoual in the Derb Ghallef neighbourhood is this painting by NDZW, a street artist from Vienna Austria.  It was completed in 2019 as part of that year’s Sbagha Bagha

Nearby are two other murals.  First, is this man painted by Yann Chatelin

And second is this fox by Mexican artist Seher One. 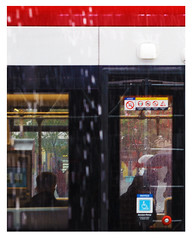 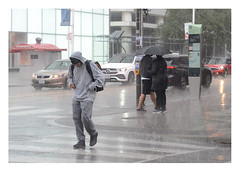 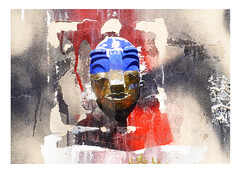