The Cafe Cinema Courtyard starts as a small alley beside the Cafe Cinema off Rosenthaler Strasse close to the Hackescher Market. It is almost completely covered with street art of all kinds – painted murals, stickers, paste ups and more.

below: “It’s time to dance”, one of many large paste-ups by SOBR

below: The same hedgehog that I saw in Tallinn….  the work of Edward von Longus

below: Flower Power, straight from the 1960’s, by Joiny

below: Lisanne, Dagmar and Donna were here as were Berlyn and Yasmyn.  Russian matryoshka dolls and Fabrege eggs watch the boxing match between facebooks and instagram.   The Russian themed stencil is the work of ost.up.berlin

below: Ann Franke by Jimmy C (aka James Cochrane)

below: by Garavato, a Colombian street artist, painted in 2016

below: A yellow creature by Peng.  In the background is a circle with a silhouette of Charlie Brown and Snoopy sitting on the roof of the dog house, by Osch aka Otto Schade.

below: Pasteup of boy in blue by @tona_one

below: A couple of yarn bombs too.

below: Soon, Azione!, and Joiny (the girl in the British telephone booth)

below: by MIMI the clowN

To find out where we’ve taken street art photos, check our “Locations” page!

Altered signs in Madrid are the mainly the work of two different artists.  The first is a local that goes by the name Yipi Yipi Yeah, or YYY for short.   The second is Clet Abraham whose work is found in most large European cities.   Searching for these signs can make a game out of walking around a city!

below: A YYY sign, “pais apatrida busca asilo” while wearing a Spain T-shirt that says “Spain is different”.  The words on the white bar translate to “stateless country seeks asylum”

below: Another Yipi Yipi Yeah sign with a Spanish theme -this time a crowd is cheering as flour black bulls go after other people.

below: A single matador on the crosswalk with his red cloak leading the way.

below: A yield sign becomes cleavage that is barely held together by a couple of pieces of lace.

below: Fishing.  The word is perdigon, a young partridge.  I’m not sure if it part of YYY’s work.

The next few are by Clet Abrahams.

below: Skateboarding on Calle de Fucar.

below: Romeo, Romeo, wherefore art thou?

below: Chiselling away at the mouth, an artist at work.

below: There are a few signs that are the work of an unknown person, including this xenofobia stencil.

below: And last, also by an unknown person, are these eyes watching over the street.

Here are a few photos of the graffiti that I saw on Corbet Place, London E1.

below: Into the machine, a MCLN plague doctor paste up.
The words in the background are ‘Dreamland Emporium’

below: With horus, and with eyes all over, another MCLN plague doctor.

below: A face at the end of the street.

below: Hello, is it me you’re looking for?  Not where you’d expect to find Lionel Ritchie.

below: A Voxx face, Stay Lucky, Code, and a Mario Brothers (sort of!)

below: On the wall at the corner of Jerome and Corbet. A very messy wall.

below: I’m doubtful that this is actually on Corbet Place but it’s nearby and it’s colourful!

Photos were taken in September.

Woodseer Street is one of the many little streets that runs off of Brick Lane.   In September 2016 I saw quite a few little stencils and paste ups here (with a few other things).

below: A large Plin face at the end of the street.

below: Another red headed woman by C3 beside a wrdsmith typewriter that will always wonder. Period.

below: On gold coloured paper, two male heads by Mayu_ LA_, one with checkered horns and one with a crown.

below: Sidewalk stencil, “Find them” by drsc0

below: A simple hand print.

below: D7606 bottles in primary colours below a two faced man by drsc0 and a skull.

below: Double yellow, eye beneath.

below: A Voxx Romana poster

below: Skating on the crack; boarding on the wire.

below: Soldier silhouette by Ben Naz .  He was born in Strasbourg, France in the late 70’s, the son of a Filipino father and a French mother.   His street art career lasted for more than 20 years but sadly was recently ended when he died of cancer.

below: An electric creature, four legs and a tail.

below: The layers of interaction.  First there was a man painted on a wall who was standing on the sidewalk.  Now a torn poster covers his mid-section, a poster that is torn, peeling, and written on.  He was a two headed man but that’s not in the photo.

below: There was one mural on this street and this is it.  Unfortunately, the signature has been tagged over and is very difficult to read but I’m fairly certain that it says Bicicleta, a Brazilian artist.

below: Broken man on a black pole, even all the hands can’t keep him together – or maybe they’re tearing him apart?

below: Another sidewalk stencil.

below: There are so many people in his head, a paste-up.  At first I thought that it was by Motormannen but they are a music group, not an artist …. and if you look closely that’s actually a sticker that’s been placed on top of the poster.

below: I started this post with a face and I’ll end with one too.  There’s a bit more colour in this one and the mouth’s not quite as big 🙂

Just east of Commercial street in Tower Hamlets, Shoreditch is Jerome Street, one of many little streets in the area.  The old home of Godfrey Phillips Ltd, tobacco and cigarette manufacturers is at the corner of Jerome and Commercial.   The lower level with the red brick and large windows is now a restaurant.

below: It’s a bird, it’s a plane…. no it’s suit wearing mallards with proper footwear.   Face the Strange.

below: Go fly your kite with this cute teddy bear by unify.

below: An assortment of stickers and paste ups.   A man with Mickey Mouse ears – Magic Kingdon, Join the Club.   Three of the posters are in Italian – one is mostly obscured by the skull, the one below the skull translates to “I have the memory of a goldfish” and the one above Mickey ears is a longer description of how this person can’t describe is love for another.  The poetry is the work of Movimento per l’Emancipazione della Poesia.

below: A tribute to Prince

below: Another assortment of stickers and paste ups.  Another Join the Club, Mickey mouse based paste up – this time with “Where dreams come true”.  Also, more Face the Strange but instead of flying ducks, we have fruit portraits.  Do men look better with grapes or oranges instead of faces?  I like the matching gloves on strawberry man.   Lastly, I think that’s Queen Elizabeth in the pink and blue poster, along with I made you a moron.  Think of it what you will.  I suspect that the Rebel Rabbet sticker was added later.

below: Stick figures with something to say, even if it’s things like “Danger is only safe in pairs”, “Once all this was just a memory” and “You can’t paint a hen”.

below: The whole wall (fence)

below: Another view of the street

below: London beach on construction hoardings 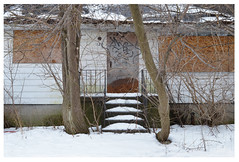 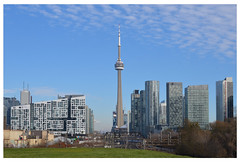 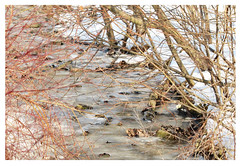