There are many murals that feature images of faces, both male and female, in Wynwood (Miami).  Two of them are featured here.

The first is a large blue young woman with flowing grey hair, painted by Leticia Mandragora.   Her eyes contrast sharply with the rest of her face.  Mandragora is an Italian/Spanish street artist and tattooist.   Her blue faced woman have been painted in a number of places in the USA.  They all seem to have grey hair too.

The second mural is a memorial to street artist Israel Hernandez (aka Reefa) who died after being tasered by police in August 2013.   The portrait in the center portion was painted by Axel Void while a number of other artists contributed to the edges.

below: Justice for Reefa 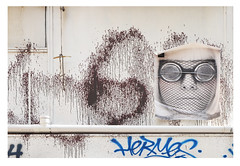 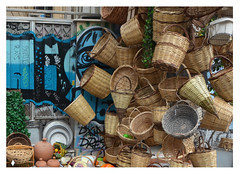 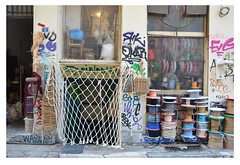