Graffiti and street art seen on Princelet Street, another small street in Shoreditch.

A wall covered by street art and graffiti of all kinds – paint, stencils and pasteups – by many different artists.   The children pointing their guns at the jester (pied piper?) is a painting by Otto Schade.  The Muslim woman and white man at Stik people by street artist Stik.   Three black and white posters, top middle, have slogans and pictures of people…. “Greed for oil causes war” features George W. Bush and Osama bin Laden.  “Consumerism causes child labour” features an Asian child and a Barbie like doll.  The third poster talks about debt dependence being addictive and shows a picture of the man from the Monopoly game.

below: Three portraits.  Two women by voxx flank a gilded framed picture of Karl Lagerfeld by endless.  Mr. Lagerfeld is holding a white cat as well as some Chanel perfume bottles.  For some reason there is a small naked man in the picture too.

below: Nietzsche’s Beyond Good and Evil paste-up by buenocaos aka Luis Bueno.

below: A red head by C3 sits on the ground beside a woman by iljin.

below: A ballerina by neoh

below: Coming apart on the wall.

below: Savant says to Collapse the Certainties

below: Some very sharp claws… chasing the worm?

below: And last, a small red figure high on a wall.
It seems to be trying to get something off of its head 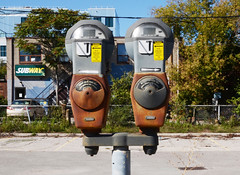 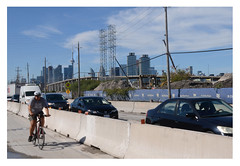 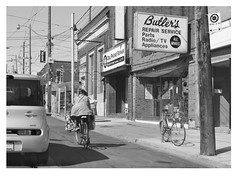