below: Hero of the Beach (Ben Rider), Be Brave (donk), Play Nice (donk), and Adventures into the Future

below: This characters are the work of qWeRT (on instagram)

below: A pouting child beside the steps.

below: Ribcage and a pink ‘Grab This’ pussy with a gun.  The latter is by Ben Rider (instagram)

below: Paint me a rainbow

below: A torn version of the picture above along with some other pasteups.  Men in glasses, profanity pony wishes, and a more complicated poster with a hand, a skull, and other things.   The words on this last one say ‘Office of the Medical Examiner, County of Cook’.   Eyes dominate two of the posters – same artist?

below: She carries an awkward load on the left while the girl on the right is well armed and well prepared.

below: Another donk piece – a pirate lying in a liquor bottle with another bottle in his hand.

below: I was in Bristol just before the British elections in the spring of 2017. There was quite a few anti-May/Tories and pro -Corbyn/Labour graffiti including this dinosaur themed one.

below: The Humble Magnificent with masked boy, a donk piece.

below: A creature waits outside number 42

below: mcln’s plague doctor character is in Bristol too.  He’s drawn on a printed page and the words in that rectangle are ‘resist the temptation’. 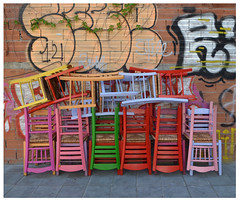 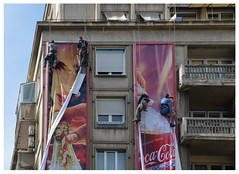 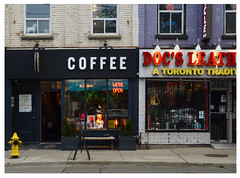