L’Boulevard – A long wall was painted with several murals by different artists as part of the first Sbagha Bagha festival in 2013.  Many of the colours have faded and some parts of the wall’s surface has disintegrated, but enough of the pictures remain that with some imagination you can visualize what was once there.

The wall is in the older part of Casablanca, near Avenue des FAR and Place de la Concorde.

The animal (dog?) in the leather helmet and aviator glasses is the work of Aouina as are the coloured squiggles at the bottom.

A young man on his motorbike, by FLAN and Cisco KSL, both from Barcelona (the latter seems to be more involved with tattoos & clothing recently). The rider seems to have lost his cigarette and a screw or two.  I am not sure who did which part of the mural.

A taxi full of people, and many people beside, by Rebel Spirit aka Mohammed Elbellaoui

The old man and the teapot were also painted by Rebel Spirit.  Originally, there was writing in Arabic beside the man.  The top part of the wall has broken off, taking the artwork from the murals with it.

This older woman with the head scarf, heavy load, and walking stick was painted by Mouhim Simo.  The red paintings (above) are a later “addition”.

This stencil work has been added since the murals were painted.  It looks very Moroccan with the blue tile work.  The two men neatly fit into a heart.

Beside it is another stencil by the same artist.  This time it is four winged fish radiating from the center.   Unfortunately, I haven’t been able to figure out the artist’s signature. 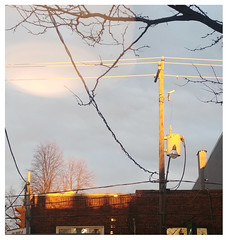 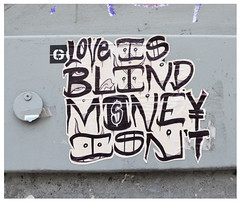